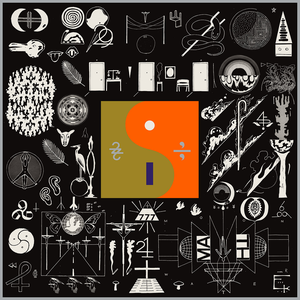 The ten songs of 22, A Million are a collection of sacred moments, love’s torment and salvation, contexts of intense memories, signs that you can pin meaning onto or disregard as coincidence. If Bon Iver, Bon Iver built a habitat rooted in physical spaces, then 22, A Million is the letting go of that attachment to a place. “I’m taking deeper consideration in another kind of place–our friendships and connections to other people.” Justin proclaims this shift in ’33 “GOD”’: “These will just be places to me now”. Rather than places we encounter a collection of numerical relationships: binary code, mystic ages, Bible chapters, math-logic, repeating infinities. Inside these numbers are a sonic distillation of imagery from the past years of turbulence and how to recover. We hear about positionality (“Down along the creek”, “In the stair up off the hot car lot”), strategies (“I’d make myself escape”, “Steal and rob it”), situations (“Carrying his guitar”, “Sent your sister home in a cab”), new lexicon (“Astuary King”, “Wandry”, “Paramind”) temporalities (“The math ahead, the math behind”, “It might be over soon”) and repeated visuals (“Five lane divers”). These words reveal the riddle of dualities: pain and love, suffering and redemption, omens and happenstance. Such ambiguity and interpretation is the core of how Justin composes words: there are always two ways to see something. Beneath this Daoist-impressionism, we hear the footsteps of a process, the relationships that have kneaded the album’s cause. A locked horns angel, empathetic ears and sagely blessings—friends who have provided themselves in different roles to mold this music into form. To narrow this album down to the next step within an “artistic career” would be to miss a far grander purpose of this music—or any music for that matter—and the cultures of friendship that sustain us in our capacities to even play music. Although22, A Million emerges from a swirling context of transformation in Justin’s recent life, it is based on how we have always approached what music can be or do. It is not the perceived power of money and fame that will change the course of events in one’s life, but empathy. Music is a pathway that allows us to listen to ourselves and the people that surround us. It is a pathway to understanding that actively creates change in real-time. Music, even in its most intimate moments, is a pathway between us all. It is the nuts and bolts of humanity as well as its totality. It is made sacred between people and in return makes those relationships sacred. It is the buoyant substance that we grab onto when the water rises above our heads. The answer has been here the entire time: just music, always. Read more on Last.fm.