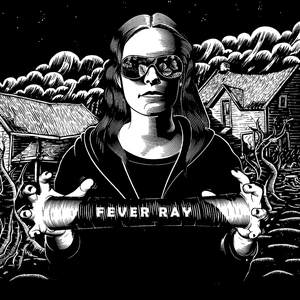 Fever Ray is the debut solo album from Fever Ray, an alias of Karin Dreijer of the electronic duo The Knife. At first, it's a little difficult to determine where the Knife ends and Fever Ray begins. On paper, it's clear -- the Knife is the project of Karin Dreijer and her brother Olof, while Fever Ray is Karin with co-producers Christoffer Berg, Van Rivers, and the Subliminal Kid -- but the differences aren't as distinct when listening to Fever Ray the first few times. Initially, the album's dark, frosty atmosphere feels like a continuation of the Knife's brilliant Silent Shout, and the oddly bouncy rhythms on songs like "Triangle Walks" and "Coconut" recall the duo's exotic-yet-frozen Nordic/Caribbean fusion. Eventually, though, Fever Ray reveals itself as far darker and more intimate than anything by the Knife. The Knife's spooky impulses are usually tempered by vivid pop instincts that Fever Ray replaces with a consistently eerie mood, particularly on "Concrete Walls," which feels like an even grimmer cousin of Silent Shout's "From Off to On." However, Fever Ray's mix of confessional lyrics and chilly, blatantly synthetic and often harsh sounds make this album as successful an electronic singer/songwriter album as Björk's Homogenic. These are some of the most alluring and disturbing songs Dreijer has been involved in making: the excellent album opener "If I Had a Heart" explores possibly inhuman need with a churning, almost subliminal synth and murky bass driving Dreijer's pitch-shifted vocals (which sound more like a different part of her psyche than a different character in the song); when her untreated voice comes in, keening "will I ever ever reach the floor?" she sounds even more frail and desperate by comparison. The rest of Fever Ray follows suit, offering fragile portraits and sketches that walk the fine line between intimate and insular. Dreijer further expands on the storytelling skills she developed on Silent Shout: the characters in her songs feel even more resonant and unique, especially on "When I Grow Up," which is as fascinatingly fragmented as a child's train of thought, skipping from sentiments like "I'm very good with plants" to "I've never liked that sad look by someone who wants to be loved by you." She also has an eye for unusual details, as on "Seven"'s "November smoke/And your toes go numb." It all comes together on the haunting "Now's the Only Time I Know," where the low end of Dreijer's voice sounds especially vulnerable and the lyrics fill in just enough to be tantalizing. At times, Fever Ray threatens to become a little too mysterious, but it never sounds less than intriguing, from the layers of claps and castanets that make up the beat on "I'm Not Done" to "Keep the Streets Empty for Me"'s almost imperceptible guitars. With almost tangible textures and a striking mood of isolation and singularity, Fever Ray is a truly strange but riveting album. Fever Ray .... vocals, engineer, mixing, producer Christoffer Berg .... mixing Henrik Jonsson .... mastering Japan release (contains the Bonus Tracks) : "if i had a heart" .... Familjin re-mix (Familjin is Johan T Karlsson) [familjin is Swedish for "The Family"] "when i grow up" .... Van Rivers "dark sails on the horizon" mix "if i had a heart" .... Fuck Buttons re-mix Read more on Last.fm.