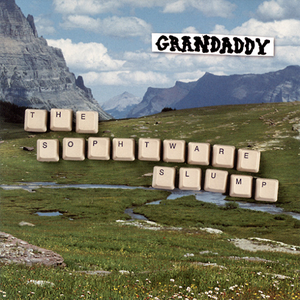 The Sophtware Slump is the second studio album by American indie rock band Grandaddy. It was released on 29 May 2000. It is seen by some as a concept album about problems concerning modern technology in society. The album was released to critical acclaim. Being their second album, the title is a reference to a sophomore slump, a term given to an artist's second album which is seen to fail to live up to the first album. The album was reissued in 2011 with a second disc of bonus material containing B-sides, EP tracks, outtakes, and demos. The album was written and recorded by frontman Jason Lytle alone in a remote farmhouse. He has been quoted as saying, "I just remember everything out there was dusty. Humidity and dust", and described having made the recordings "in my boxer shorts, bent over keyboards with sweat dripping off my forehead, frustrated, hungover, and trying to call my coke dealer". Regarding the album's recurring android, Jed, who appears in the tracks, "Jed the Humanoid" and "Jed's Other Poem (Beautiful Ground)", Jason Lytle noted, "I used Jed as my therapy vehicle, I guess... I was attempting to approach the subject of drinking, and possibly the fact that you may perhaps drink a little bit too much. Humour has always been way up there at the top of my list of dealing with anything that could be considered serious. Sometimes you don’t wanna be smacked in the face with certain bits of reality like that." The album's penultimate song, "Miner at the Dial-A-View", originates from a 1989 home demo, with Lytle noting, "After a certain point, when the earth has been tapped of all its resources, they start mining other planets. And there’s these machines – they’re a lot like, y’know, the tabletop poker games that you find in bars now – and the idea is to add coins to it, and you can punch in the latitude and longitude of places on earth, and revisit wherever you want. And [the narrator]’s actually revisiting his house, and he’s seeing the girl that he’s got back home is hanging out with some other guy, and he misses home." Read more on Last.fm.