Lanterns On The Lake - Gracious Tide, Take Me Home

Lanterns On The Lake 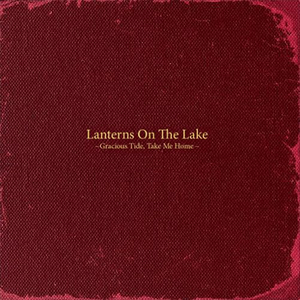 Lanterns On The Lake's "Gracious Tide, Take Me Home" (Sep 2011, Bella Union), includes tracks: 1. Lungs Quicken 2. "I've Been Unkind" 3. "Keep On Trying" 4. "Ships In The Rain" 5. "A Kingdom" 6. "The Places We Call Home" 7. "Blanket Of Leaves" 8. "Tricks" 9. "You're Almost There" 10. I Love You, Sleepyhead (aka I Love You Sleepyhead) 11. "Not Going Back To The Harbour" The album was produced by Paul, as he did the band’s first two EPs, The Starlight EP (2009) and Misfortunes & Minor Victories (2010) Budgets being tiny for the EPs, the band borrowed an eight-track recorder and captured every intimate breath and soaring crescendo in their own homes and at an isolated house in Northumberland. Handmade sleeves for both EPs reinforced the self-sufficient approach, as did a series of gigs (“we were reluctant to play normal venues like pubs”) in places such as a boathouse on the Tyne river, and the Tan Hill Inn in North Yorkshire (famously, the highest pub in Britain, an event is now an annual mini-festival). Relishing their independence, the band eschewed a recording studio for the album; “you only get to make your debut album once,” says Hazel, “so we wanted it to be personal and honest and special to us, so we recorded everything in our own houses again. Though the loud bits were done in a basement of a shop in Newcastle!” With more of a budget than before, and more experience, ‘If I’ve Been Unkind’ (sung by Adam) and ‘I Love You, Sleepyhead’ from Starlight and ‘A Kingdom’ from Misfortunes… were re-recorded for the album, to reflect their current live incarnations. The remaining eight tracks are brand new. Given the emotional heft and melodic riches on show, it’s no surprise that Bella Union are releasing the album after signing the band long-term. “We’re big fans of the label and it felt like a perfect home for our music,” says Hazel. There might be a vein of sadness through this music - ‘Ships In The Rain’ was inspired by a local fisherman who went missing at sea, and ‘A Kingdom’ (and the Misfortunes… EP) was inspired by a book of letters sent home by WW2 soldiers – but there is just as much hope in ‘Lungs Quicken’, ‘Keep on Trying’ and ‘You’re Almost There’, where fear and insecurities are banished by self-belief; “the feeling that you’re going places,” as Hazel says. Mirroring the sentiment of the album title, ‘I Love You, Sleepyhead’ and ‘Places We Call Home’ draw on the comfort and security of home, friendship and memory. But Gracious Tide, Take Me Home is imbued with that feeling of going places. Sites: Discogs Read more on Last.fm.