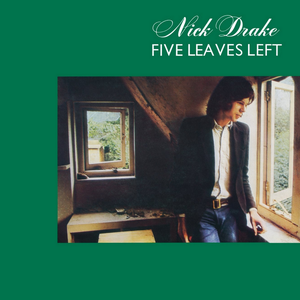 Five Leaves Left is the debut studio album by English folk musician Nick Drake. It was recorded between 1968 and 1969 and released in 1969 by record label Island. Among his various backing musicians, Drake was accompanied by Richard Thompson, at that time with Fairport Convention and Danny Thompson of The Pentangle. Robert Kirby, a friend of Drake's from his youth, arranged the string instruments for several tracks while Harry Robinson arranged the strings for "River Man". The title of the album is said to be a reference to the old Rizla cigarette papers packet, which used to contain a printed note near the end saying "Only five leaves left". Drake died five years after recording the album. The album regularly appears on lists of the best albums of all time. The album was ranked number 283 on Rolling Stone magazine's original 2003 list of "The 500 Greatest Albums of All Time". NME ranked it at number 258 on their 2013 list of "NME's The 500 Greatest Albums of All Time". It is said that Drake felt frustrated at the lack of commercial success his music initially gathered, considering the help he had on his debut record. Besides fine production from Joe Boyd and assistance from folks like Fairport Convention's Richard Thompson and his unrelated bass counterpart from Pentangle, Danny Thompson, Drake also recruited school friend Robert Kirby to create most of the just-right string and wind arrangements. His own performance itself steered a careful balance between too-easy accessibility and maudlin self-reflection, combining the best of both worlds while avoiding the pitfalls on either side. The result was a fantastic debut appearance, and if the cult of Drake consistently reads more into his work than is perhaps deserved, Five Leaves Left is still a most successful effort. Having grown out of the amiable but derivative styles captured on the long-circulating series of bootleg home recordings, Drake assays his tunes with just enough drama -- world-weariness in the vocals, carefully paced playing, and more -- to make it all work. His lyrics capture a subtle poetry of emotion, as on the pastoral semi-fantasia of "The Thoughts of Mary Jane," which his soft, articulate singing brings even more to the full. Sometimes he projects a little more clearly, as on the astonishing voice-and-strings combination "Way to Blue," while elsewhere he's not so clear, suggesting rather than outlining the mood. Understatement is the key to his songs and performances' general success, which makes the combination of his vocals and Rocky Dzidzornu's congas on "Three Hours" and the lovely "'Cello Song," to name two instances, so effective. Danny Thompson is the most regular side performer on the album, his bass work providing subtle heft while never standing in the way of the song -- kudos well deserved for Boyd's production as well. According to the River Man Songfacts, the album title referred to the warning found towards the end of a packet of Rizla cigarette papers, that there were only five leaves left. Read more on Last.fm. 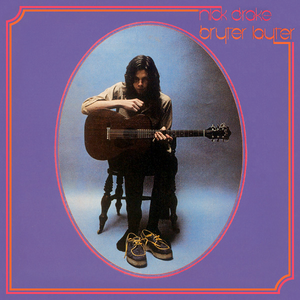 Nick Drake's second studio album is broadly similar in sound and outlook to his first, Five Leaves Left. It also assembled many of the same musicians, and Robert Kirby as arranger, whose string and occasionally woodwind scores have become indelibly associated with Drake for most listeners. Notably, as well as some of the most characteristic of Drake's songs, there are the somewhat soul-gospel-like 'Poor Boy' among the track listing on Bryter Layter, and a handful of instrumental tracks which wrap orchestrated melodies around Drake's trademark elaborate fingerpicking guitar accompaniment. The latter have proved controversial among fans, variously called 'lift music' or considered signs of a radical experimentalism. A lot may depend on the debated question of whether Drake or Kirby wrote the melodies used (as opposed to the arrangements of them). Bryter Layter has been called Drake's happiest album. Much was to change, emotionally and musically, with his next and last completed record, Pink Moon. Read more on Last.fm.

Pink Moon is the third and final album by English musician Nick Drake. It was recorded at midnight in two separate two-hour sessions, over two days in October 1971, featuring only Nick Drake's vocals and guitar, as well as some piano later overdubbed by Drake on the title track. Initially, Pink Moon garnered a small amount of critical attention, but decades after Drake's death it received widespread public and critical acclaim. The music on Pink Moon is sparse and unadorned (especially in comparison to Drake's previous recordings), leading some to consider it to be the least accessible of his three albums, though it nevertheless continues to be thought of by many of his fans as his greatest work. The cover of the album features an illustration by the partner of Drake's sister Gabrielle, Michael Trevithick. Read more on Last.fm.