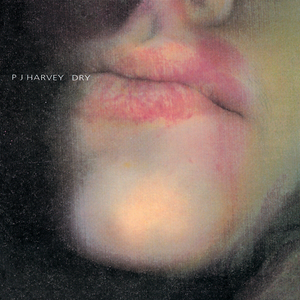 Dry is the debut studio album by the band PJ Harvey, fronted by English singer-songwriter and musician PJ Harvey, released on Too Pure Records on 30 March 1992. The album was recorded at The Icehouse, a local studio in Yeovil, United Kingdom. The first 5000 LPs and first 1000 CDs included demo versions of the album's tracks, being subsequently released in the United States on Indigo Records in the US. Both versions were released in 1992. Speaking to Filter magazine in 2004, Harvey said of her debut album: "Dry is the first chance I ever had to make a record and I thought it would be my last. So, I put everything I had into it. It was a very extreme record. It was a great joy for me to be able to make it. I never thought I'd have that opportunity, so I felt like I had to get everything on it as well as I possibly could, because it was probably my only chance. It felt very extreme for that reason." Read more on Last.fm.

Stories from the City, Stories from the Sea is the fifth studio album by English alternative rock musician PJ Harvey, released on 23 October 2000 by Island Records. Recorded during March to April 2000, it contains themes of love that are tied into Harvey's affection for New York City. The album became the second major commercial success of her recording career, following her successful breakthrough To Bring You My Love (1995). Upon its release, the album received acclaim from most music critics and earned Harvey several accolades, including the 2001 Mercury Prize. It spent 17 weeks on the UK Albums Chart, and was certified Platinum in the UK and Australia. It is generally regarded as one of her best works. In the updated version of Rolling Stone's 500 Greatest Albums of All Time, it was ranked at number 431. Background: In 1998, while shooting a film as an actress for Hal Hartley in New York, she felt inspired by the city and wrote several songs. Some of them ended on the following album. In 1999, she chose to live there for nine months. However, she insisted in interviews it was not "my New York album". Songs were also written while she was in London or at home in Dorset. Stories from the City, Stories from the Sea was then recorded at the Great Linford Manor in Milton Keynes in March–April 2000. The record was co-produced by Mick Harvey, Rob Ellis and Harvey, and mixed by Victor Van Vugt at the Fallout Shelter. The album featured a duet with Radiohead frontman Thom Yorke on the track "This Mess We're In", as well as backing vocals and keyboards from Yorke on the songs "One Line" and "Beautiful Feeling". She had met Yorke in 1992 and they had stayed in contact. She said: "I'd long been interested in the idea of somebody else singing a whole song on a record of mine, to have a very different dimension brought in by somebody else's voice. It adds so much dynamic within the record to have this other character coming in". She wanted the record to be more direct: "It's very different musically to the first couple of albums. It's very melodic, and it's much rounder and fuller. The earlier albums were very black and white in some sense, very extreme. Melodically, this is much more sophisticated than those records. It kind of feels like a combination of every album I've made so far rolled into one." The songs were also a musical departure from her previous dark material. Harvey told Q in 2001, "I wanted everything to sound as beautiful as possible. Having experimented with some dreadful sounds on Is This Desire? and To Bring You My Love - where I was really looking for dark, unsettling, nauseous-making sounds - Stories From The City... was the reaction. I thought, No, I want absolute beauty. I want this album to sing and fly and be full of reverb and lush layers of melody. I want it to be my beautiful, sumptuous, lovely piece of work." She did, however, concede jokingly that it was only "pop according to PJ Harvey, which is probably as un-pop as you can get according to most people's standards." Reception: Stories from the City, Stories from the Sea reached number 23 on the UK Albums Chart. The album was certified Platinum in the UK, with sales over 300,000 copies. The album debuted at number 42 on the US Billboard 200 chart. It has also been certified Gold in France, and has sold 1 million copies worldwide. Stories from the City, Stories from the Sea received critical acclaim from music critics. At Metacritic, which assigns a normalized rating out of 100 to reviews from mainstream critics, the album received an average score of 88, based on 25 reviews. NME hailed it as "a magnificent, life-affirming opus" by Harvey. Robert Christgau called it "the best album of her career" in his review for Rolling Stone. Other critics rated it as only average. Spencer Owen of Pitchfork Media viewed the album as lacking in distinction, saying "the sheen gets slicker and her music gets duller". The publication later, however, ranked it at number 124 in their "The Top 200 Albums of the 2000s" list in 2009. Accolades: The album earned Harvey BRIT Award nominations as Best British Female Artist for two years running, as well as two Grammy Award nominations for Best Rock Album and Best Female Rock Performance for the single "This Is Love". For the album, Harvey was nominated for the 2001 Mercury Prize for the third time (her previous nominations were for Rid of Me and To Bring You My Love). The award ceremony was held on September 11, 2001. Harvey was in Washington, D.C. on that day and witnessed the terrorist attacks on the Pentagon from her hotel room window. She was announced as the winner and accepted her award by phone, saying "It has been a very surreal day. All I can say is thank you very much, I am absolutely stunned." The win made Harvey the first female solo artist to receive the Mercury Prize in the award's history. The album was ranked number eight on Rolling Stone's list of The 50 Essential "Women In Rock" Albums. In 2002, Q magazine named "Stories From The City, Stories From The Sea" the Greatest Album of All-Time by a Female Artist. In 2006, the album was chosen by Time as one of the 100 best albums of all time. In 2009, Pitchfork named the album the 124th Top Album of the 2000s. In 2009, NME also placed the album inside their Top 100 Greatest Albums Of The Decade, at number 6. The album was also included in the book 1001 Albums You Must Hear Before You Die. Rolling Stone named it the thirty-fifth best album of the decade. Read more on Last.fm. 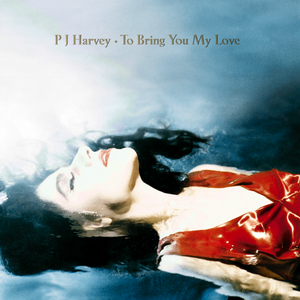 To Bring You My Love is the third studio album by British musician and singer-songwriter PJ Harvey. It was released by Island Records in February 1995. Recorded after the break-up of the PJ Harvey trio it stands as her first proper solo album. The songs on the album are heavily influenced by American blues music. To produce the album, Harvey chose Flood, best known for his work with U2, Depeche Mode, and Nine Inch Nails. Harvey co-produced the record with Flood and John Parish. To Bring You My Love would be the first of Harvey's many collaborations with Flood and Parish. The music on the album was played largely by Harvey and Parish, with contributions from seasoned musicians Joe Gore, Mick Harvey, Jean-Marc Butty, and others. Many of the musicians who appeared on the album joined Harvey on tour to support it in 1995 and 1996. To Bring You My Love is considered to be PJ Harvey's breakthrough. It garnered massive critical acclaim worldwide and became her best-selling album. The single "Down By the Water" received extensive airplay on radio and on MTV. The album is ranked number 435 on Rolling Stone magazine's list of the 500 greatest albums of all time. Read more on Last.fm. 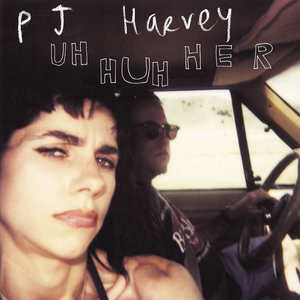 Uh Huh Her is the sixth studio album by English alternative rock musician PJ Harvey. The album was written, recorded and produced over a two-year period by the singer-songwriter herself. She also played every instrument in the album – a first from Harvey since 4-Track Demos in 1993 – with the exception of the final drum tracks, added by long-time collaborator Rob Ellis. It was released on 31 May 2004 in the United Kingdom and on 8 June 2004 in the United States. To support the release, Harvey toured for seven months. She performed in various European summer festivals such as Glastonbury and opened for Morrissey in a few dates. During the same tour she also performed the album's unreleased title-track. Uh Huh Her debuted and peaked at number 12 in the UK Albums Chart and has been certified Silver by the BPI.[5] It became Harvey's highest charting album to date in the U.S., peaking at number 29 in the Billboard 200, and had sold more than 135,000 copies there as of 2005, according to AskBillboard. Although it charted higher than Stories from the City, Stories from the Sea in many territories, Uh Huh Her failed to achieve its predecessor chart longevity and crossover interest. The album received largely positive reviews upon its release, although there was some criticism towards its production. It currently holds a 79 out of 100 metascore at Metacritic based upon 28 reviews, indicating "Generally Favorable Reviews". Uh Huh Her also earned PJ Harvey nominations to awards such as the Grammy Awards and the Brit Awards. Read more on Last.fm. 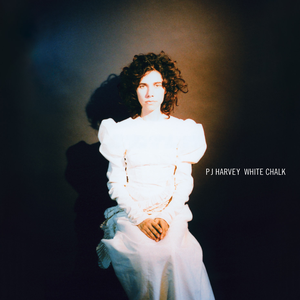 WHITE CHALK is as surprising a musical change of direction for Polly Jean Harvey as the bluesy, torchy TO BRING YOU MY LOVE was back in 1995 after the corrosive guitar fury of the English singer-songwriter's first two albums. Indeed, WHITE CHALK may be PJ Harvey's most unexpected work yet, as well as her most artistically accomplished. Putting down her signature guitar in favor of piano (an instrument she has never played on record before), Harvey has crafted a gloriously strange song cycle that owes much to the art rock likes of Kate Bush or Genesis-era Peter Gabriel. These 11 songs tell a fractured, loosely connected story that blends allegorical fantasy with some of the most intensely personal vocal performances of Harvey's career. Highlights include the phantasmagorical "When Under Ether" and the near apocalyptically intense closer "The Mountain," although WHITE CHALK is one of those albums that is best experienced as a whole. Personnel: PJ Harvey (acoustic guitar); Martin Brunsden, Briget Pearse, Nick Bicât, Andrew Dickson (vocals); John Parish (acoustic guitar); Nico Brown (concertina); Eric Drew Feldman (keyboards); Jim White (drums). Rolling Stone (p.76) - 4 stars out of 5 -- "[The songs] have a cold pastoral kind of chill, as Harvey howls about being possessed by demon lovers and ghosts in 'The Devil' and 'The Piano.'" Spin (pp.95-96) - 3.5 stars out of 5 -- "Now, romantic desire's dark and twisted side is Harvey's main creative turf....Her vocals are downright pretty, sounding more like those of a traditional English singer than the raging punk Medusa of old." Q (p.98) - 4 stars out of 5 -- "Shunning the guitar in favour of gauzy piano and smudged vocals, Harvey sounds like she's channelling through a Victorian medium..." Uncut (p.84) - 4 stars out of 5 -- "An album of lonely beauty and piercing sorrow, WHITE CHALK is PJ Harvey back at the peak of her considerable powers." The Wire (p.60) - "Harvey's new strategy has been successful....It's certainly her most haunting work." The Wire (p.35) - Included in The Wire's "50 Records of the Year 2007". Q (Magazine) (p.80) - Ranked #24 in Q's "The 50 Best Albums Of 2007" -- "Harvey produced an album of such unsettling intimacy that it dares you to play it alone in the dark." Read more on Last.fm. 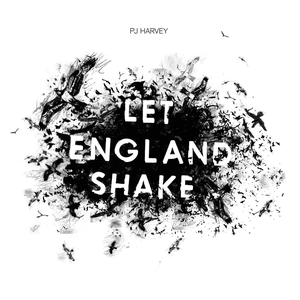 Let England Shake is the eighth studio album by PJ Harvey. It was released on 14 February 2011 in the UK, and on 15 February 2011 in the US. Work on it began around the time of White Chalk's release in 2007, though it is a departure from the piano-driven introspective collection of that album. It was written between late 2007 and 2008, and recorded over a five-week period. Read more on Last.fm.