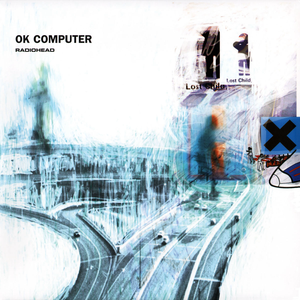 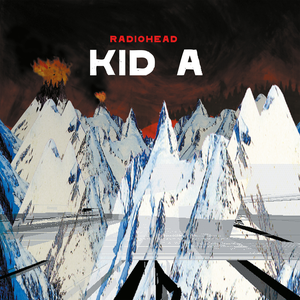 Kid A is the fourth studio album by the English rock band Radiohead, released on 2 October 2000 by Parlophone. On the verge of a breakdown after promoting Radiohead's 1997 album OK Computer, songwriter Thom Yorke envisioned a radical change in direction. Radiohead replaced their rock sound with synthesisers, drum machines, the ondes Martenot, string orchestras and brass instruments, incorporating influences from genres such as electronic music, krautrock, jazz, and 20th-century classical music. They recorded Kid A with OK Computer producer Nigel Godrich in Paris, Copenhagen, Gloucestershire and their hometown Oxford, England. The sessions produced over 20 tracks; Radiohead saved many of them for their subsequent album, Amnesiac, released the following year. Radiohead released no singles or music videos to promote Kid A and conducted few interviews and photoshoots, instead becoming one of the first major acts to use the internet as a promotional tool. The album was made available to stream and was promoted with short animated films featuring music and artwork. Bootlegs of early performances were shared on filesharing services and the album was leaked before release. Kid A debuted at the top of the charts in Britain, where it went platinum in the first week, and it became Radiohead's first number-one album in the United States. Like OK Computer, it won a Grammy for Best Alternative Album and was nominated for Album of the Year. Its departure from Radiohead's earlier sound initially divided fans and critics, but it later attracted widespread acclaim; at the turn of the decade, Rolling Stone, Pitchfork and the Times ranked Kid A the greatest album of the 2000s, and in 2012, Rolling Stone ranked it number 67 on its list of the 500 greatest albums of all time. Read more on Last.fm. 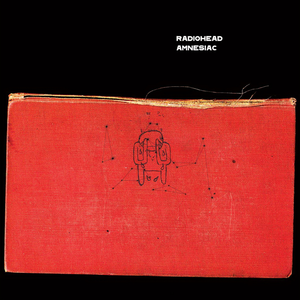 Amnesiac is the fifth studio album by the English alternative rock band Radiohead. It was released on 4 June 2001 in the United Kingdom and on 5 June 2001 in the United States and Canada, debuting at #1 on the UK charts and #2 on the Billboard Top 200. Seen as the furthest departure yet from the rock style and heart-on-sleeve songwriting of the band's early career, Amnesiac nevertheless has more audible guitar than its direct predecessor Kid A, and unlike that album, it spun off several singles. Like Kid A, it synthesizes influences of electronic music, ambient music, classical music, and jazz. Only These tracks on the album & All tracks written by Radiohead. not the 26 "Packt Like Sardines in a Crushd Tin Box" – 4:00 "Pyramid Song" – 4:49 "Pulk/Pull Revolving Doors"[note 1] – 4:07 "You and Whose Army?" – 3:11 "I Might Be Wrong" – 4:54 "Knives Out" – 4:15 "Morning Bell/Amnesiac" – 3:14 "Dollars and Cents" – 4:52 "Hunting Bears" – 2:01 "Like Spinning Plates" – 3:57 "Life in a Glasshouse" – 4:34 Read more on Last.fm. 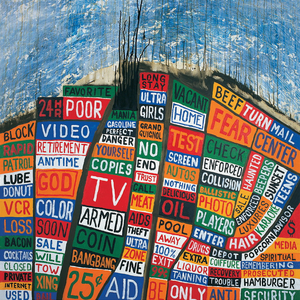 Hail to the Thief (subtitled The Gloaming, written as Hail to the Thief, (or, The Gloaming.) in the album booklet) is the sixth studio album by English rock band Radiohead, released on 9 June 2003 in the United Kingdom and 10 June 2003, in the United States. It debuted at number one in the UK and at number three in the United States. After two Radiohead albums that featured heavily processed vocals, less guitar, and strong influence from experimental electronica and jazz, Hail to the Thief was seen as a return to alternative rock, drawing its sound from every era of the band's existence. Preceded by the single "There There. (The Boney King of Nowhere.)", the album reached number one on the UK charts, and met with modest but worldwide commercial success, selling 994,000 units in the United States. Band members described the album as having a more "swaggering" sound and a relaxed recording process, in contrast to the tense Kid A and Amnesiac sessions. At nearly an hour in length, Hail to the Thief is the band's longest album, although many of its songs are within the three- and even two-minute range, shorter than the band's average. Thom Yorke said he was inspired by Beatles songs of that length which he thought felt much longer. This album has been released with the Copy Control protection system in some regions. The album received universal acclaim from professional critics upon release, based on a Metacritic score of 85/100, or 85%. Neil McCormick, writing in The Daily Telegraph, called it "Radiohead firing on all cylinders, a major work by major artists at the height of their powers", and the record performed typically well in magazines' end-of-year lists, especially in the United States. It was the fifth straight Radiohead release to be nominated for a Grammy for Best Alternative Album. Unswayed, the NME's James Oldham saw it as "a good rather than great record" and Alexis Petridis of The Guardian called it "neither startlingly different and fresh nor packed with the sort of anthemic songs that once made them the world's biggest band." In 2004, coproducer Nigel Godrich and engineer Darrell Thorp were honoured with Grammy Awards for their work on Hail to the Thief. Like the album itself, every song on the album has two titles. The intended titling for the album is as follows: 1. 2 + 2 = 5. (The Lukewarm.) - 3:19 2. Sit Down. Stand Up. (Snakes & Ladders.) - 4:20 3. Sail to the Moon. (Brush the Cobwebs out of the Sky.) - 4:18 4. Backdrifts. (Honeymoon Is Over.) - 5:23 5. Go to Sleep. (Little Man Being Erased.) - 3:22 6. Where I End and You Begin. (The Sky Is Falling In.) - 4:29 7. We Suck Young Blood. (Your Time Is Up.) - 4:57 8. The Gloaming. (Softly Open Our Mouths in the Cold.) - 3:32 9. There There. (The Boney King of Nowhere.) - 5:24 10. I Will. (No Man's Land.) - 1:59 11. A Punchup at a Wedding. (No no no no no no no no.) - 4:57 12. Myxomatosis. (Judge, Jury & Executioner.) - 3:53 13. Scatterbrain. (As Dead as Leaves.) - 3:22 14. A Wolf at the Door. (It Girl. Rag Doll.) - 3:21 However, due to a misprint in the album artwork, there was no period after the "5" in "2 + 2 = 5". Read more on Last.fm. 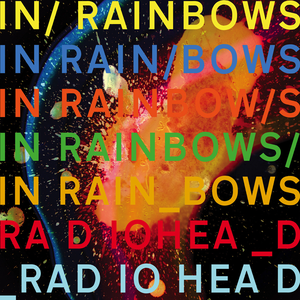 In Rainbows is the seventh studio album by the English alternative rock band Radiohead. It was first released on 10 October 2007 as a digital download that customers could order for whatever price they saw fit, followed by a standard CD release in most countries during the last week of 2007. The album was released in North America on 1 January 2008. In Rainbows was Radiohead's first release after the end of their contract with EMI and the end of the longest gap between studio albums in their career. In Rainbows was recorded in London, Somerset, Wiltshire and Oxfordshire with producers Mark Stent and Nigel Godrich. Radiohead worked on the songs for more than two years, beginning in early 2005. In between recording, the band toured Europe and North America for three months in 2006. Radiohead used a wide variety of musical styles on the album, incorporating string arrangements and electronic music, pianos, celestes and the ondes Martenot, yet renewing their focus on guitars, drums and bass as lead instruments. The songwriting on In Rainbows was more personal than that of Radiohead's other work, with singer Thom Yorke describing it as his attempt to write "seduction songs". Upon its retail release, In Rainbows entered the United World Chart, UK Album Chart, and the U.S. Billboard 200 at number one. In Rainbows also earned widespread critical acclaim, and several publications ranked it as one of the best albums of 2007. Read more on Last.fm. 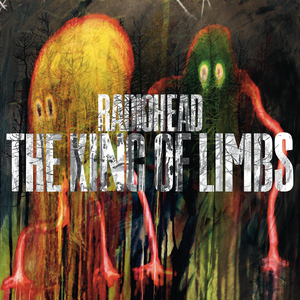 The King of Limbs is the eighth studio album by English alternative rock band Radiohead, produced by Nigel Godrich. It was released on 18 February 2011 as a download in MP3 and WAV formats. It was followed by a physical CD release on 28 March 2011. A special "newspaper" edition was released on 9 May. The "newspaper" edition contained two 10-inch vinyl records in a special record sleeve, many large sheets of artwork, 625 tiny pieces of artwork, a compact disc, and a colour piece of oxo-degradable plastic package. The album was released by TBD in the United States, XL in the United Kingdom and Hostess Entertainment in Japan. The album was announced on Radiohead's website on 14 February 2011, four days before release. The name of the album refers to an oak tree in Wiltshire's Savernake Forest, thought to be 1,000 years old. The tree is a pollarded oak, referring to an ancient technique for harvesting timber for fencing and firewood. Though it does not feature on maps, the tree is said to be 3 miles (4.8 km) from Tottenham Court House, where Radiohead recorded part of their previous album In Rainbows. On 18 February, Radiohead's official blog published the first song from the album, "Lotus Flower", with an accompanying music video, followed by a post announcing the album was released. Read more on Last.fm. 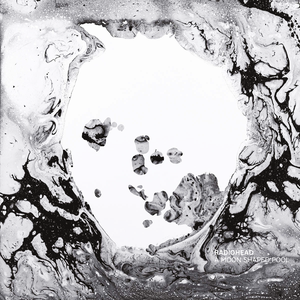