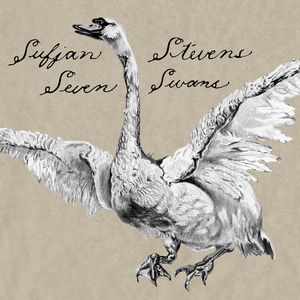 Seven Swans is a folk rock music album by Sufjan Stevens. It includes songs about Abraham and Christ's Transfiguration, among many others. The album is softer and sparser than other albums by Stevens, relying more heavily on his trademark banjo and melodious voice. Seven Swans was received well by critics. The Guardian called it "a record of remarkable delicacy" and Spin magazine said it sounded "like Elliott Smith after ten years of Sunday school". The album was released on compact disc and vinyl LP; the vinyl was released by Burnt Toast Vinyl. Biblical allusions Many of the songs on Seven Swans tell stories directly from the Bible. All the Trees of the Field Will Clap Their Hands is a reference to Isaiah 55:12, where Isaiah says, "You will go out in joy and be led forth in peace; the mountains and hills will burst into song before you, and all the trees of the field will clap their hands." In the Devil's Territory is probably a reference to Matthew 4:1, where Jesus spends forty days and forty nights fasting in the desert in order to face the temptation of the devil. The first line of the song references Psalm 46 and possibly the Brian Wilson song Be Still. To Be Alone with You discusses Christ's atonement and how it has made him intimately connected with humanity ("You gave your body to the lonely, they took your clothes. You gave up a wife and a family, you gave your goals; to be alone with me...to be alone with me you went up on a tree.") The beginning could also be a lament of Judas Iscariot; "I'd give my body to be back again, in the rest of the room [upper chamber where the Last Supper was held]," or Sufjan himself lamenting past sins, comparing himself to Judas. Abraham references Genesis 22:1-19, wherein Abraham is tested by God and told to sacrifice his only son Isaac. Abraham is, at the last moment and with knife in hand, stopped by an angel and instead sacrifices a ram to God. We Won't Need Legs To Stand is most likely speaking of the new, perfect bodies to be received upon entering Heaven. ("When we are dead, and we all have wings, we won't need legs to stand.") He Woke Me Up Again is possibly referencing 1 Samuel 3, in which God keeps calling Samuel from his sleep, although in terms of the track itself, literally seems to refer to a father waking up his sleeping son. Seven Swans references the Book of Revelation, though cloaked as a strange personal account. Though there are not seven swans in the Book of Revelation, there are seven angels (Revelations 8:2), and there is certainly a mention of seven horns, either the seven trumpets of the angels (Revelation 8:2) or the seven horns of the Lamb of God (Revelation 5:6). There is also Revelation 19:17: "...to all the fowls that fly in the midst of heaven, Come and gather yourselves together unto the supper of the great God". The fire in the yard may refer to the "hail and fire mixed with blood" cast upon the earth (Revelation 8:7). Also mentioned is a dragon (Satan) who tries to attack a woman who flees (Revelation 12:3-6) The Transfiguration references the transfiguration of Jesus witnessed by the disciples Peter, James, and John found in Matthew 17:1-12. The song tells this story in a straightforward manner. Other allusions In the Devil's Territory alludes to the George Harrison song Long, Long, Long - a song about finding God. A Good Man Is Hard to Find is based on Flannery O'Connor's short story of the same title. It is told from the viewpoint of the Misfit even though he is not the focus of the story. "The Transfiguration" incorporates elements and motifs from Chicago, another song by Sufjan Stevens, leading up to the climax and through to the end of the song. The Dress Looks Nice on You (single) A 7" limited edition single of the second track of Seven Swans, The Dress Looks Nice On You, was released by Rough Trade in support of the album on March 8, 2004. The single features the song Borderline as a B-side. There was also a CD promo release of the single which features the same tracks. Professional Reviews ★★★★☆ - AllMusic ★★★★☆ - The Guardian ★★★☆☆ - Rolling Stone 8.1/10 - Pitchfork ★★ - Robert Christgau Read more on Last.fm.