The Knife in Collaboration with Mt. Sims and Planningtorock 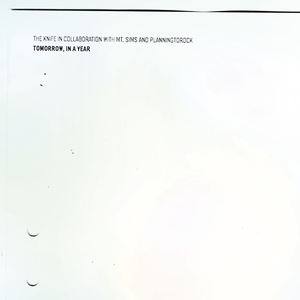 Commissioned by Danish performance group Hotel Pro Forma to write the music for their opera based on Charles Darwin and his book ‘On the Origin of the Species’, The Knife decided to make this a collaborative process, working with artists Mt. Sims and Planningtorock for the first time, to capture the huge width of the Darwin and evolution theme. They extensively researched Darwin related literature and articles, with Olof attending a field recording workshop in the Amazon to find inspiration and to record sounds. ‘Tomorrow, In A Year’ is a unique musical project. Richard Dawkins’s gene trees have formed the basis of some of the musical composition, artificial sounds have been mixed with field recordings, with the music inspired by everything from the different stages of a bird learning its melody, to a song based on Darwin’s loving letters about his daughter Anne. These are compositions that challenge the conventional conception of opera music. Pushing the experimental process further still, composer, choreographer, costume designer and set designer worked separately, only coming together 3 and a half months before the first performance of ‘Tomorrow, In A Year’ in Copenhagen on the 2nd September 2009. Described as “shifting the position of operartic art in a single leap”, further performances of ‘Tomorrow, In A Year’ are confirmed to take place in Athens (8-9 Jan), Stockholm (29 Jan-1 Feb), and Munster (5 June), with further dates to be announced. Olof Dreijer says: “At first it was very difficult as we really didn’t know anything about opera. We’d never been to one. I didn’t even know what the word libretto meant. But after some studying, and just getting used to opera’s essence of pretentious and dramatic gestures, I found that there is a lot to learn and play with. In fact, our ignorance gave us a positive respectless approach to making opera. It took me about a year to become emotionally moved by an opera singer and now I really do. I really like the basic theatrical values of opera and the easy way it brings forward a narrative. We’ve approached this before in The Knife but never in such a clear way.” The first track to be taken from the album, called Colouring of Pigeons, was free to download now for all mailing list subscribers (http://www.theknife.net/tommorow-in-a-year-information.html#mailinglist) Tracklist: CD 1 01. Intro 02. Epochs 03. Geology 04. Upheaved 05. Minerals 06. Ebb Tide Explorer 07. Variation of Birds 08. Letter to Henslow 09. Schoal Swarm Orchestra CD 2 01. Annie’s Box 02. Tumult 03. Colouring of Pigeons 04. Seeds 05. Tomorrow in a Year 06. The Height of Summer Bonus track 07. Annie's Box (alt. vocal) Read more on Last.fm.