The Postal Service - Give Up 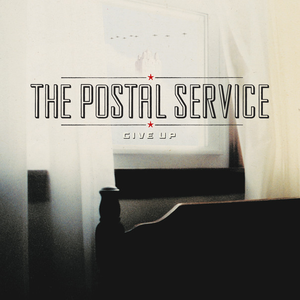 Already assured a place on the best of 2003 cd list, The Postal Service’s first album ‘Give Up’, and the group themselves, have experienced a sudden almost startling rising success. They’ve deftly shaken-up America like a gentle, buzzing electrical storm, sending out wonderfully harmonic, wake up world tones from seemingly everyone’s stereos. Originally created as a by mail, almost pen pal style, side project, in only a few short months people have embraced and clamored for this wonderfully grand, unique blend of intelligent electronic music and emotional indie pop. By teaming together, The Postal Service has managed to create a sort of Indie Supergroup. By following the typical Dntel m-o, Jimmy Tamborello united talented artists to contribute to his electronic stylings. Apparently, since the team stayed the same throughout each song they decided to give themselves a name and come out as a full-blown side project. All of the players in this postal game come from bands rolling uphill in their own right. The talented sirens Jen Wood, who has a list of credits a mile long including a fairly successful solo career and the singing duties of the former band Tattle Tale, and Jenny Lewis, lead vocalist from Rilo Kiley whose band had an explosion of popularity last year when their latest album received rave reviews from every conceivable publication, add grace tremendously to the album with their angelic voices harmonizing and backing each track, in some cases adding more and turning these electro pop morsels into full blown duets. From the Indie staple group Death Cab For Cutie came background instrumentalist extraordinaire Chris Walla, who has helped make DCFC albums as enjoyable as they have been throughout the years, and singer, guitarist Ben Gibbard. Last year they released a compilation album to a grateful audience, which was a well-received, typical DCFC release, full of scratchy guitars and Ben’s distinct singing, but the typical Death Cab release is very different from what has blossomed here. On Give Up, Chris Walla provides scores of undetectable enhancements to each song and, Gibbard delivers his extremely touching lyrics with such clarity that it’s undeniable what parts of his life you’re looking into. It seems many are surprised that Ben is such a good songwriter! Who knew? You can hear his soft-sung vocals here much better than in a Death Cab For Cutie song, where often the words are overtaken by crunchy instrumentation. These songs are riddled with heart and ethereal symphonic beeping that permeates your head and gently massages all the right spots on your brain, while filling your body with a tingling, gravity defying substance. You find yourself floating up high and then you slowly spindrift your way back down to earth on the subtle rises and falls in every goose bump inducing tune. Many of the songs talk about dreaming and sleep, and rightly, the whole album has a very dreamy feel. The single, ‘Such Great Heights’, is the best example of this tonal mind massage as the electronic keys slice daggers through your minds most annoying defenses. All doubt and pompous skepticism are immediately stripped away from even the most jaded music elitist as they’re sucked into pure enjoyment. The song ‘Clark Gable’ speaks of an all too familiar despondence solved with a creative bid at movie magic, when thoughts about how romance maybe isn’t all we were told to believe collide with the desire to maintain the fantasy by a hopeless romantic. But above all ‘Nothing Better’ is the true darling that is even mentioned with hesitance. You’d rather keep this heart-tearing duet, selfishly, all to yourself, before touting it’s gut-wrenching beauty to others. Impressively, the remarkable combination of these peoples efforts have helped to make The Postal Service stand out in ways their full time projects have not. Not to be taken as a knock to any of these exceptional rising bands, in fact the problem that these bands can’t be knocked is one of the great concerns of this ‘side project’. With such a bubbling pot of boiling hot talent, how could it possibly not risk the danger of spilling over? The mind fills with questions as to the future of this band and the original bands that fans have already come to endear. What will people cry for if the law of supply and demand is tested? Would The Postal Service sound as unbelievable with different performers filling it’s ranks? And predominately what’s on everyone’s mind is: what the hell is this wonderful music?? Where did it come from, how can it possibly be this fresh? The idea of fusing electronic music with emotional singing isn’t an incredible brainstorm. You’ve heard talented people doing it for years. But there is just something profoundly different about this soft, sincere pairing. Maybe it’s the magical combination of these talented individuals, or maybe it’s a glorious niche in style they’ve somehow uncovered, but whatever it is, it’s been exposed to the masses and the people have had their taste. Like an animal who’s tasted human flesh, there is no stopping the insatiable crave for more, after you’ve heard enough of these sounds to permeate and clutch your brain there’s no going back; you’re going to join the throngs of wild humans clamoring for more. Review by, Michael Delgado purchase and learn more at:: http://www.subpop.com/artists/the_postal_service Read more on Last.fm.